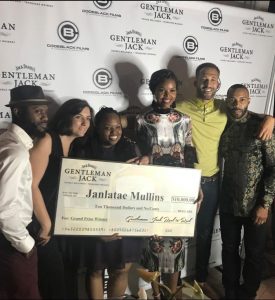 Janlatae’ Mullins won the 2017 Jack Daniels Gentleman Jack Real to Reel film contest for the short film Soul Fire which she wrote and directed. The film was executive produced by Maxine McClintock. The announcement was made at the 2017 American Black Film Festival in Miami, FL.

Janlatae’ is an award winning director and producer based in Atlanta, GA. She has helmed several critically acclaimed independent short films including one of which she was named Best Director at the 2014 International Black Women’s Film Festival.

Being a strong believer in the power of collaboration, Janlatae’s ability to develop honest performances and capture those performances with the corresponding visual style makes her the right choice for any talent driven work. Currently, Janlatae’ is writing a pilot for a 1 hour dramedy.