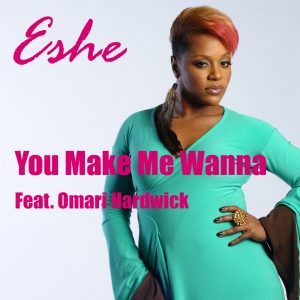 2X Grammy Award winning artist Eshe is breathing new life into her career with the release of her new single, “You Make Me Wanna” (Feat. Omari Hardwick) which is the first single from Eshe’s upcoming EP titled Eshe Means Life. The video was filmed in Atlanta, GA and is directed by independent film director Nicole D. Parker (Gorgeous Knight). Eshe says, “Wow! What an experience it was working with Nicole D. Parker and Orgin Nile Films. I’m delighted to call her a friend and that I can share this new journey with a female director. How cool is that . . . real cool!”

The song “You Make Me Wanna” was produced by Japanese producer Mabanua. “It’s always an absolute pleasure to work with my friend Mabanua! He is such an incredible artist, producer and drummer . . . a secret weapon.” Eshe says. Eshe co-wrote the song with Kevin Maxim and actor/poet Omari Hardwick (Sparkle / For Colored Girls) who is also featured on the song performing spoken word and is Eshe’s love interest in the music video. Eshe says, “It was such an AMAZING experience working with actor/poet Omari Hardwick. I learned lots about acting through the video process; he really pushed me to limits that I have never experienced before.”